On the same day that the story about a levelling of life expectancy (LE) and possible links to austerity hit the press, the Journal of the Royal Society of Medicine published my letter responding to the paper that sparked a flurry of interest in the same topic earlier this year. That paper was entitled “Why has mortality in England and Wales been increasing? An iterative demographic analysis“.

Irritatingly, I have no budget to pay for open-access publication, so although the original paper is freely available, my letter outlining the paper’s errors is not. In addition, as the JRSM does not publish letters as “advance access”, the points I wished to make have been held back for 3 months. This feels pretty unsatisfactory.

One side of the argument is out there and its refutation is not, which is a shame as the paper has some profound flaws – none of which have stopped the authors from quoting the paper as if it were reliable: 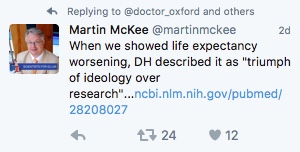 In addition to which, the authors’ response to my letter suggests the critique to make little difference to their conclusions. I am not persuaded.

So here is a summary of what is wrong with its analysis.

Altogether, the errors in the paper are extensive and fundamental to its entire thesis. They seem to me to kill the assertion that there is yet evidence of a real change in mortality trend. What remains is simply the very substantial excess winter deaths figure for 2014-15. The key point is surely to ask whether there is an underlying trend once the noise of winter variation is removed. I do not believe that has been demonstrated in this paper.

One thought on “Misinterpreting mortality”